I went to Potlatch, a Typepad blog,  and was mildly interested in this article and wanted to comment. I've commented there before, but only occasionally. I never had any trouble in doing so under my 'internet name' of Charlie McMenamin before. But I did tonight.

I have an 'internet name' as I am self employed and do work for local authorities, not-for-profits and charities. I  have a personal website which advertises my wares under my real name. I also have a Facebook page, a Google+ presence and a Twitter account in my real name.

I don't want folk Googling me and finding all my disgraceful political  opinions popping up. I can separate my work life and out of work life, but I don't want to leave a trail on the net behind me . Hence the nom-de-plume.  I know, of course, that anyone with a scintilla of IT savvy could break this light disguise in a matter of moments. But the folk I work for aren't like that: they just don't want anyone with baggage. I try to keep my baggage separate.

So I pressed 'more' and got this:

I used the drop down box which gave me the opportunity to sign in using Twitter or Google and lots of other options as well as Facebook - or to registered with Typepad using the same spread of options - but all of them reverted to my real identity, presumably picking up on my registrations under other platforms. I suspect there must be a way to make some comment on Potlatch's blog as Charlie McMenamin but, blimey, its not obvious and its very, very hard to find.

Now, I suspect Potlatch can live with the pain of not reading my response to his post. To be frank, I've already forgotten what I was going to say anyway*.   But this has been a mildly sobering moment for me - all that stuff about the disappearance of privacy suddenly came home to roost.

Small stuff, perhaps. But then my impact on the internet world has been precisely small stuff. I just want the space to do it privately.

* But, hey, Will, for the record,  I'm a big admirer of your style of writing and width of reading. But a sentence like,"A perceived virtue of neo-classical economics, as a tool for public decision-making, is its simplicity." really won't do, at least not without expansion. Neo-classical economics' 'simplicity' is shrouded in Maths which most of us find very, very complicated. Perhaps it is there to disguise the underlying simplicity?


Posted by CharlieMcMenamin at 21:36 16 comments

Email ThisBlogThis!Share to TwitterShare to FacebookShare to Pinterest
Labels: clever e-stuff I don't quite grasp, Sign of the Times 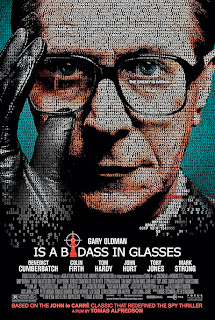 In another stunning demonstration of  how far I’m ahead of the cultural curve, I finally watched last year’s Tinker, Tailor, Solider Spy last night. (Yes, I know: just call me Mr.Zeitgeist). And very good it was too. Or very good ‘in its own way’, at least - I’ll explain my caveat below. Basically: it’s 1973 and there may be a mole in the British Secret Service.

But it’s not the content of the film I primarily want to talk about: it’s the 'framing' of the story. Let's start with the cinematography:“..this is a sad, shabby, drably grey-green world of obsessives, misfits, misdirection, disillusionment, self-delusion and treachery”, said Empire at the time of release. The Guardian review expanded on this theme,

“ It is a tatty, nasty, shabby and stiflingly male world of beige and grey, seen through a dreary particulate haze – fag-ash and dandruff. The interiors and government offices are lit with a pallid, headachey glow. Every room looks like a morgue, and the corpses are walking around, filling out chits, wearing ill-fitting suits, having whispered conversations, giving and receiving bollockings and worrying about loyalty. “

This is indeed a shabby world, without redeeming splashes of colour anywhere. It is the received vision of how the 1970s were, but with the dial turned up to 11 to emphasis the especial shabbiness of the secret world and the compromised characters that inhabit it. It’s the received vision because the 1970s are commonly remembered as the low point of national decline. It's like a visual polar opposite to that would-be-funny  25th anniversary Virgin Airlines ad where sexy  hostess babes in red uniforms and high heels create havoc in a dull, grey 'hung-over-from the-1970s' Heathrow.

Co-incidentally, I’ve also just unpacked the DVD box set of the 1979 TV series of the same book. The one with Alec Guinness, rather than Gary Oldman, playing Smiley.  Guess what? London buses are bright red and the sun sometimes shines even in pre-Thatcherite Britain. Who knew?

Let me try to explain why that is important.

I’m a bit obsessive about the TV series - I’ve long recalled it as one of the highpoints of TV culture, up there with Boys from the Blackstuff, The Wire or West Wing. A single episode in to a re-viewing and I’ve seen nothing to shake me in this conviction. To my mind it is infinitely better than the film.  I don’t insist you agree. If you prefer the film, that’s fine by me.

But if you’re too young to have seen the TV series the first time round you should at least be told that the film is a kind of historical costume drama.  It presents a certain vision of the secret world, but it’s our world really in fancy dress. It’s a representation of not only how we think British intelligence works – Smiley, after all, was  an icon of the British spy novel genre for decades before this film was made – but how  we think living through the Cold War, and living through the 1970s specifically, actually felt. It felt grey, uncertain, always teetering on the edge of hopelessness & defeat: these are the subliminal messages we’re supposed to pick up.

In 1979 it was possible to treat a script set only six years earlier as a contemporary drama. Characters gave contemporary reactions to events and the actions of others. It is very striking how much obviously posher most of the senior figures in the Secret Service are in the TV series to the film. The common, assumed background in public school and Oxbridge Senior Common Rooms is never far from the surface.  It's shabby-genteel poshness, of course - but its unmistakable. By contrast the equivalent characters in the film might well be wearing dreadfully cut 1970s suits but they're straight outta of a set of (superficially) declasse executive management offices with a nice view of the atrium. They have those declasse accents one now finds everywhere in positions of power not directly colonised by Old Etonians. 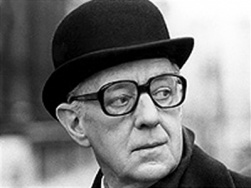 What's more age matters: the people are the top of the Secret Service are men in their late forties and middle fifties. In 1973 that meant one very, very basic thing - The Cold War was their second war. As young men they fought the Axis. This is especially clear in the books, where Smiley is a frustrated scholar of German literature diverted from his academic path by the events of the mid C20th. It also meant that, as posh children  of the 1920s and 30s, they grew up expecting  to be functionaries of a great Empire.

The book and the TV series are suffused with a sense of the secret life as a morally compromised, and compromising,  fog - but part of that comes from the fact that as young men the protagonists won a war in alliance with their now enemy. Furthermore, they felt that, in some intangible way, the fruits of victory had slipped through their hands. Even the Great Power status their predecessor generations of Whitehall-Military servants had successfully nutured for 200 years or more was little more than a fig leaf by the early 1970s.

All of this is invisible in the film. Yet without a perspective on these matters I don't see how anyone can get an emotional 'hook' on why anyone of that generation - be they characters in a Le Carre novel, Burgess, McLean or Anthony Blunt - might foresake the advantages of a secure  slot in the upper reaches of Britain's class bound society for a life as a Soviet mole.

&, for me, that makes the film two dimensional compared to the TV series. The greyness of the characters' world was not everyone's experience of the 1970s, it was very specifically that of a particular sub section of society with a very specific  cultural formation.

For some of us the 1970s was the time when we 'never had it so good' -  employment was much higher, the new tertiary education opportunities were really opening up, the abortion & homosexual law reforms of the 1960s were taking firmer root. New legislation around women's right and racial equality came into force. Wages have never claimed such a big percentage of GDP as they did in 1974


What has any of this got to do with the film? Well, it's simple: the world that was slipping out of the control of the senior Circus executives was a world that was opening up new possibilities for many other people. By visually implying the 1970s were grey and sullen and unhappy times the film ellides this. It’s Cranford dressed up as Life on Mars.

Posted by CharlieMcMenamin at 16:17 11 comments