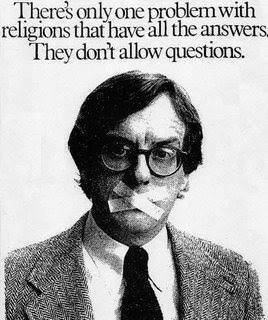 It's almost always a mistake to believe that people who say stupid things are stupid. Generally they're not. Generally they're just incapable of seeing why they're so wrong because to do so would involve examining some deeply held, perhaps even unconsciously held, set of assumptions.

I take as my case in point David Blunkett who today tackles the phenomenon of opinion polls shows public sector workers preferring to vote Tory. How can this be he asks, when Labour have poured so many millions into the public sector? Briefly he considers whether this can be put down to,

".. the uncertainty arising out of radical reform of public services; a feeling of insecurity about whether the workforce is valued; and the general instability that comes with rapid change."

But, no, this doesn't make sense to the sage of Sheffield: privatisation worries might be ten fold more pertinent under the Tories. So Blunkett thinks it's because they're they're simple, frightened folk who don't really understand what is going on:

"The pressure to improve services and to overcome outdated practices has led to workers feeling that the devil they don't know is better than the devil they do. ....The simple fact is that they are expressing an instinctive opposition to those who are currently in charge - the present "establishment". It's not possible to believe that rational men and women would want to vote away their jobs, to undermine the public services to which they have devoted their lives. It has, therefore, to be much more about lashing out, expressing a feeling of insecurity and of fear."

Insecurity? Fear?I shall resist the temptation to refer Mr.Blunkett to the title of a book expressing the traditional Labour creed called, ahem, in Place of Fear. Because I don't believe that is the real reason why Labour are losing the loyalty of the public sector.

Quite apart from the fact many public sector workers can see that much of the so called 'massive' investment in public services has flowed straight out again in the form of exploitative PFI contracts, I think the real reason is that the Blairite 'modernisation' of public service has done the exact opposite of what it set out to do. In theory, it is all about dismantling unhelpful bureaucracy, focusing on the service user and breaking from 'provider capture'. In practice it has been experienced as the crushing of a strong, if inchoate, older ethos of public service, the imposition of huge new bureaucracies (especially around procurement and 'joint working') to achieve more and more marketisation of public services and a top down target driven regime. In short it has been about not trusting the public sector.

Thanks to the Fatman, I see some in academia are comparing this to Stalinism. & Mark Harrison, a genuine expert on Soviet economics, writes extremely entertainingly on this theme.

But for me it's the wrong analogy. New Labour aren't so much Stalinist as like one of those creepy Californian personal development cults: when they face criticism from public sector employees one can almost hear them muttering 'get with the programme' under their breathe. Change on the preset lines offered by the 'personal development' is self evidently good and resistance to change is obviously a sign of a lack of responsibility for one's own failings. The idea that the preset objectives of the course itself might be open for discussion is simply unthinkable. To raise such a possibility is threatening - after all, if these objectives are questionable why have so many people paid so much money to sit in a room doing the course in the first place?

I think what the opinion polls are saying is that the public sector workforce are silently slipping from the seminar room without waiting for the motivational personal development speaker to finish. Cult devotees like Blunkett may pursue them down the corridor haranguing them to come back and 'have the courage to change' but there is a grim determination in the stride of the staff as they head away from that softly intimidating atmosphere.
Posted by CharlieMcMenamin at 09:53