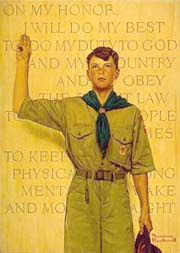 Let's be clear*: the international economy almost stopped dead last autumn. We were within days of cashpoints throughout the Western world refusing to cough up money and of automated transactions, including payments of wages, simply freezing. So how do we know that finance driven turbo capitalism won't come to the brink of collapse again at some point in the near future?

Because the new generation of Harvard MBAs are going to promise to behave better.

There is a youthful earnestness to the new Harvard Business School-inspired MBA oath, with such phrases as “I will mentor and look after the education of the next generation of leaders” and “this oath I make freely, and upon my honour”..... The MBA oath comes when capitalism’s claims to efficiency and legitimacy have been shaken....The oath includes the bromides quoted above, but it also contains a fierce rejection of the shareholder-first philosophy that has guided Anglo-American business for decades. The signatories undertake to pay equal attention to “shareholders, co-workers, customers and the society in which we operate”. They promise to aim for “sustainable prosperity” and, in recognition of the damage short-term bonuses have done, they vow not to put their own ambitions ahead of the interests of their companies.

Well I for one certainly feel reassured. & it seems so much less complicated than all that pesky regulation that others keep telling us might be necessary.

*Or possibly let's be hyperbolic as John B gently chides me. The discussion suggests that Gillian Tett thinks stuff really was that bad though, so perhaps I'm in good company...
Posted by CharlieMcMenamin at 11:13