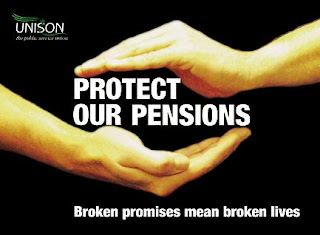 Tom P of Labour and Capital has done a kindly meant but unkind thing by tagging me with an internet meme on a subject where he is far better informed than I am. He wants to know how to improve the shareholder connection with ownership, and how pension funds should be reformed and run.

Tom’s a pension expert and I’m not. I’ve spent my working life in the voluntary sector, not the City. So my views are going to be some way short of water-tight and well-informed, to put it mildly. But I do think we on the Left have to think practically - as well as in a utopian way - if we are going to get any kind of traction on this crisis, so I'm willing to give it go.

Otherwise I'm basically with Robin Blackburn on all this. Quite apart from his call for a global pension, he has developed quite detailed reformist* views on how state backed social funds, including pension funds, might work differently,

"The Norwegian government showed in 1988-92 that radical measures of expropriation and the installation of a new management are needed if finance is to be restored to a healthy footing. Once this has been done – a process that takes years rather than months – then a choice presents itself. Either the government then sells the nationalised banks back to the private sector, or the state retains control. The Norwegian government finessed this choice by first privatising the banks and then using some of the proceeds to establish a public social fund. The latter, now known as the Norwegian State Pension Funds, was also made a beneficiary of the country’s oil revenues and is now worth around $230 billion...Resources for a regional social fund network could also be raised through some combination of a Tobin-style global financial transaction tax (FTT) or a Meidner-style share levy.......Regional social funds in receipt of share issues from the corporations would not sell the shares but hold them as sources of dividend income. While share prices can fluctuate wildly, dividends are less volatile. If each year’s share levy were set at, say, 10 per cent of profits, then it would divert a steadily growing share of dividend income to the social funds. The levy would not subtract from cash flow or the resources available for investment.

The funds could use their growing stake in corporate ownership to promote a limited but important set of objectives, including employee rights, sustainable production methods and appropriate levels of executive compensation. The funds would respond to steps that might be taken in a very unequal and crisis-prone world to stabilise markets and help build a framework for sustainable growth."

*I say reformist in a purely technical sense. I know his ideas would be considered revolutionary by many. But when I first read Blackburn he was a leading light of the International Marxist Group, so I do think there has been some movement...